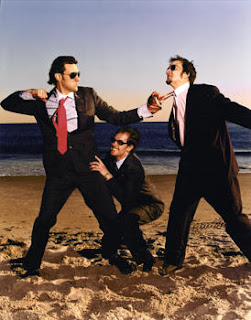 "Ever-changing dictatorships. A marketplace out of control. Armed guards protecting banks from looters. The breeding ground for a progressive power-pop/punk trio led by a classically trained cellist? Judging by the music of Pablo Cubarle and Contramano, absolutely. Despite hyper-inflation that forever seemed to deny him ownership of his own cello, Pablo vowed to pursue music. He studied classical cello, playing in a string quartet, then writing and producing his own pop opera, all while making plans for an escape that landed him in New York City on the eve of September 10th, 2001.

The ex-pat's solo project soon became a trio by way of an ad on Craigslist, adding a driving rhythm section. Pablo promptly christened them Contramano, after a Do Not Enter sign on the Buenos Aires street where armed guards stood watch. Contramanos self-titled début release, a swaggering mix of chamber pop and punk spirit, was well-received by critics and fans alike. Meanwhile, Contramano was building a reputation for high-energy live performances in and around New York City. Next came a video, opening gigs for Rasputina, a successful tour of the southeastern United States, and a new recording studio in Brooklyn, nicknamed 'The Oven' for its stifling temperatures. Everything in place for the recording and release of Contramnos much-anticipated second album, Unsatisfecho. The sound of Contramano is what happens when third world angst meets New York attitude."
- Meridith Rohana & Justin Marks

To hear music samples, visit the band's official website @ www.contramano.net
Posted by Jenn Carmona at 11:38 AM