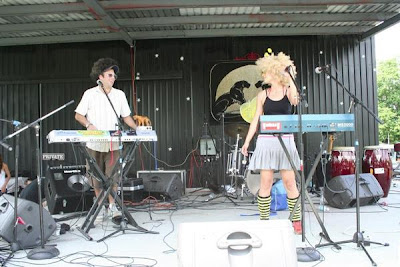 Background:
Their music is described as disco house, ghetto tech, and funk, but this Miami-based duo is no ordinary act. Afrobeta was recently named "Best Songwriters" in 2008 and were previously named "Best Electronic Band 2007" by the Miami New Times. Formed in 2006 after "Smurphio" Laurencio met his muse, Cristina "Cuci Amador" Garcia, at one of his live performances, Afrobeta has become a staple in the Miami music scene. Now, Smurphio and Cuci will be bringing their disco flavor to the NYC Latin Alternative scene.

Fun Fact:
Cuci is often referred to by the nickname "Latin Bjork" in local music circles.