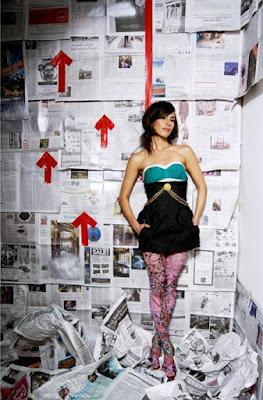 Background:
With influences that range from Stereolab and Gorillaz to Aterciopelados and Julieta Venegas, LA-based chanteuse Chana perfects her brand of "global hip-pop." Not only is Chana a talented musician but the NYC-born Dominicana danced under famous choreographers like Martha Graham and Twyla Tharp. Her single, "No Me Mandes Flores" is described as "Andrea Echeverri fronting a funk band." Chana will be bringing her flavor across the US this summer so be sure to catch her if you can (for tour dates check out her myspace page).

Fun Fact/Interesting Connections:
Chana, whose real name is Rosanna Tavarez, made her first visit to the recording studio in the now defunct WB's American Idol-esque series "POPSTARS" back in 2001. Tavarez was selected to be a part of the 5-member girl group Eden's Crush along with the lead singer of the Pussycat Dolls, Nicole Schzeringer.

Labels: "No Me Mandes Flores" - Chana

Jenn - thought you would like this about Gustavo Santaolalla. He pretty much IS latin alternative!

"His Film Scores Are Spare, His Tango Newfangled
By LARRY ROHTER
Published: August 14, 2008
BUENOS AIRES — As a pop-besotted teenager living in the suburbs here in the 1960s, Gustavo Santaolalla was so intent on becoming a musician that he even designed a logo for the record label he dreamed of owning. The idea that he would some day be able to display a pair of Oscars on his mantel, on the other hand, was so far-fetched that it never crossed his mind."
New York Times, August 14-15, 2008

Cool to see a blog dedicated to Latin Alternative. Yezve's new release may of interest to. You can check out their myspace at:

HOla, it's been so long, we miss you!

Changed your template! does it mean you are coming back????

If you don't have much time to keep posting why don't you join us? Think about it haha..