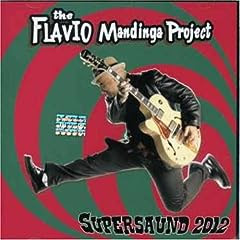 Tomorrow is the release date for Señor Flavio's, of Los Fabulosos Cadillacs, album Supersaund 2012 , and it's already gotten rave reviews.

The album, set to showcase garage rock, psychobilly, punk, and the reggae and ska Los Fabulosos Cadillacs were known for, is Flavio's way of repping his roots.

"The different styles on the album are a result of an eclectic mix of influences inspired by listening to music and just living life," Flavio says. "Being Latin American and being mestizo, fusion is part of our continent, our folklore and our pride."

Here's what the critics have to say:

"Contrary to its title, this well-crafted solo album by Los Fabulosos Cadillacs' co-founder isn't quite a projection into the future, but more of a throwback to the ska/rock that the group merged so beautifully with Latin sounds in its day."
- BILLBOARD

"There have been so many failed attempts by so-called Latin-alternative bands to strive for this kind of kitschy, laid-back fun that when Flavio achieves it so flawlessly you wonder where he'as been all these years."
- NY NEWSDAY
Posted by Jenn Carmona at 9:09 PM