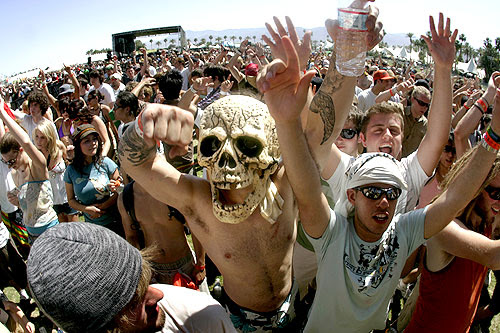 Café Tacvba will be playing this year’s Coachella Valley Music and Arts Festival. The three-day festival held in Indo, California has played host to top acts like Manu Chao, Rage Against the Machine, Red Hot Chili Peppers, and Morrissey.

Café is scheduled to perform on Saturday April 26th, the second day of the festival. This year’s festival also includes performances by MIA, Kraftwerk, Portishead, I’m from Barcelona, Tegan and Sara, Vampire Weekend, and Architecture in Helsinki, among others.

Meme, Cone Cahuitl, Quique and Joselo, better known as Café Tacvba have been together since 1989 and have been stirring up the Latin Alternative scene ever since. They are best known for one of their early songs, the corky sounding “La Ingrata” and their 1994 album Re. Café Tacvba also won the 2004 Latin Grammy award for Best Alternative Music Album with their album Cuatro Caminos.

Their latest album, Sino was released in October 2007 featuring the hit single “Volver a Comenzar.” Ranging from electronic to rock and even punk, their music is eclectic, fun, and just plain good. They also played last summer’s Lollapalloza alongside other icons like Pearl Jam, Daft Punk, Stephen Marley, and Iggy & the Stooges.

To purchase tickets visit the Coachella website. They just went on sale at 10AM this morning.

To keep up on Café news visit their myspace page.

- Stephanie Aviles
[Stephanie is a sophomore public relations major at the S.I. Newhouse School of Public Communications @ Syracuse University. She hails from San German, Puerto Rico and is a self-proclaimed record junkie. Her favorite bands include The Addicts, The Clash, Permanente, Circo, and I’m From Barcelona. Check out her posts appearing regularly on Area Álternativa.]